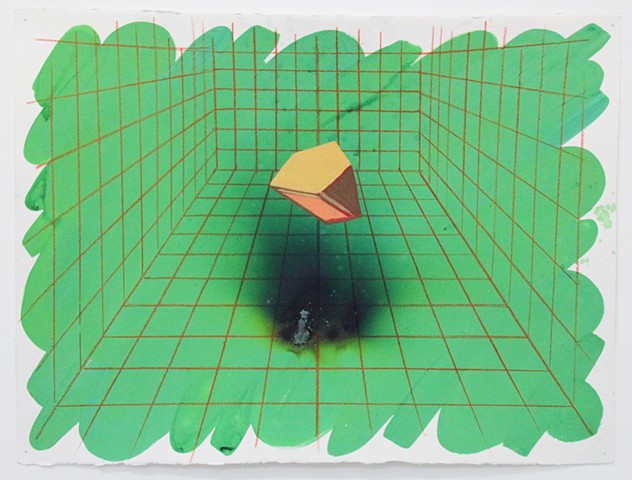 Back and Forth
Gouache, fiber paste, china marker, and smoke bombs on paper
22x30" 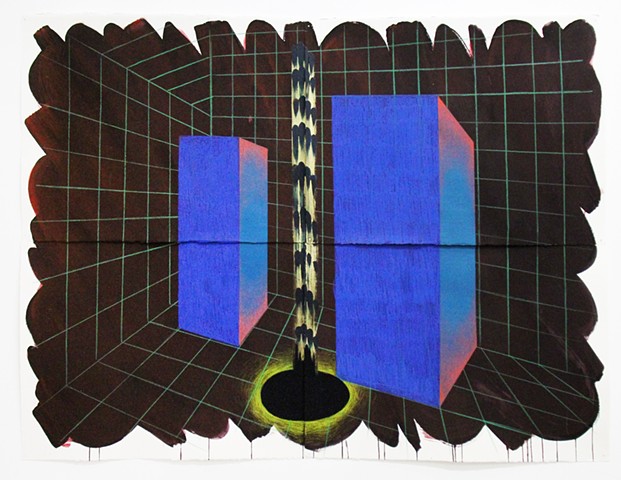 I've Played it So Many Times in my Head it's Worn Out Like a VHS Tape
Gouache, fiber paste, china marker, and smoke bombs on paper
44x60" 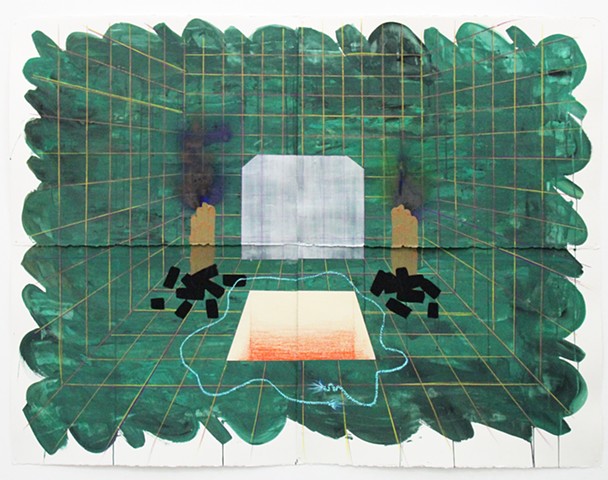 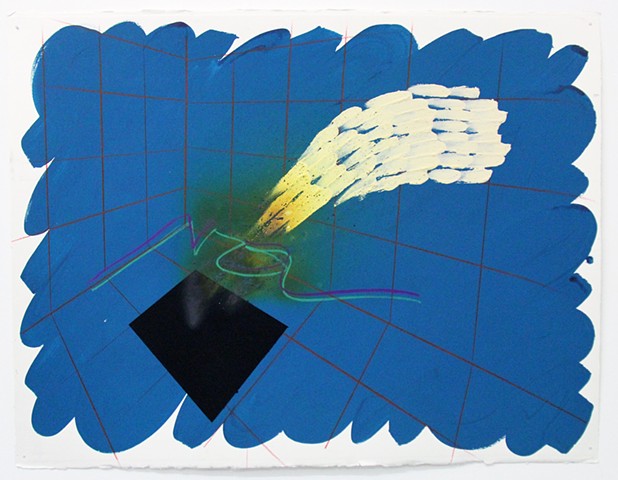 That's Why I'm in it and I Can't Get Out
Gouache, fiber paste, china marker, and smoke bombs on paper
22x30" 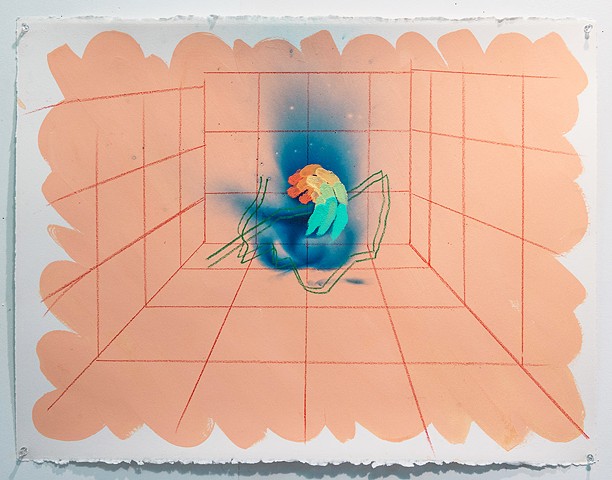 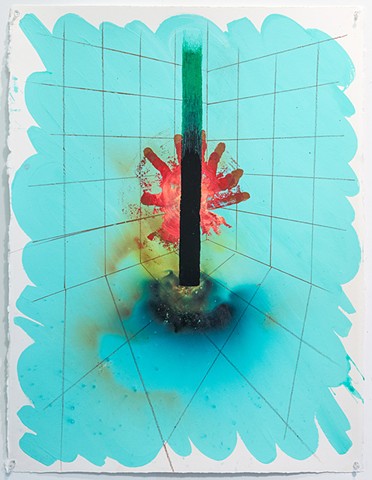 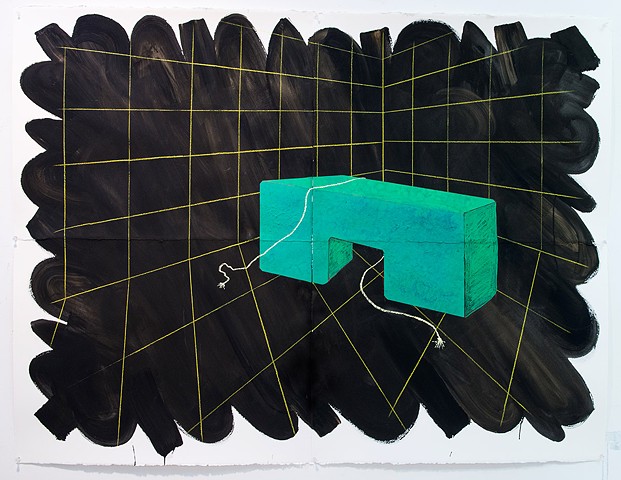 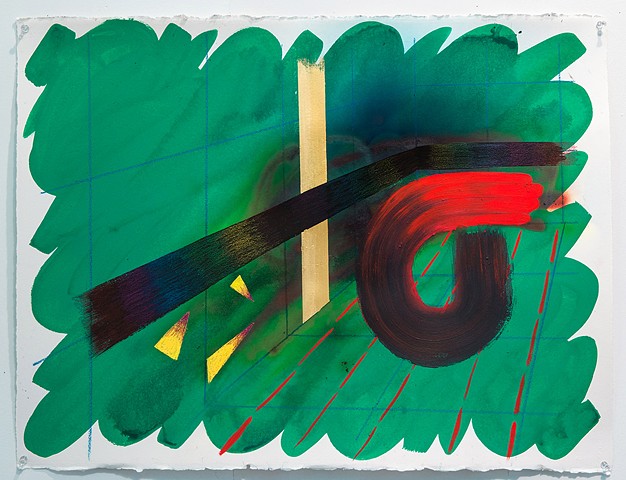 Along for the Ride
Gouache, fiber paste, china marker, and smoke on paper
22x30" 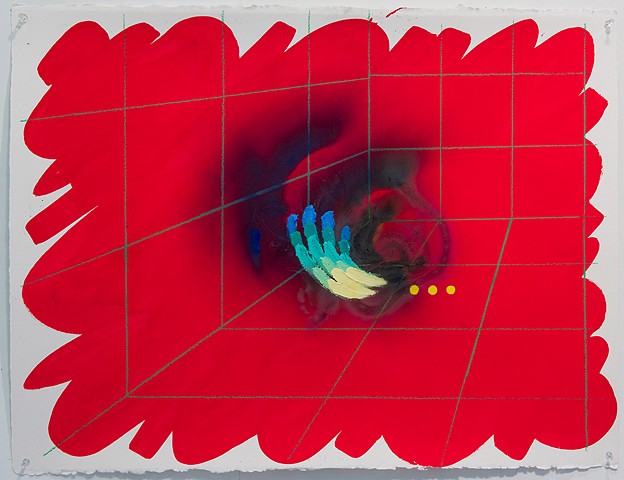 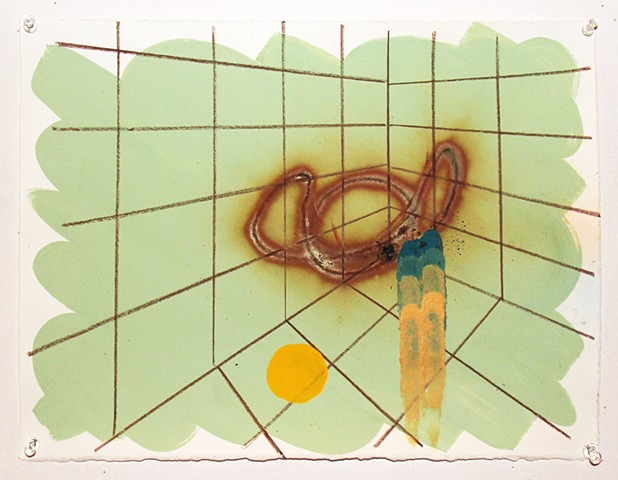 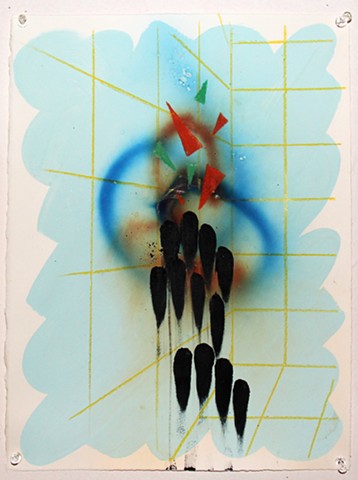 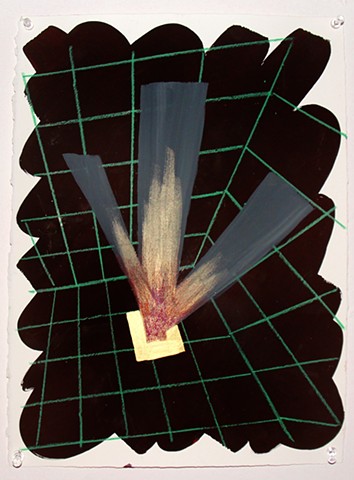 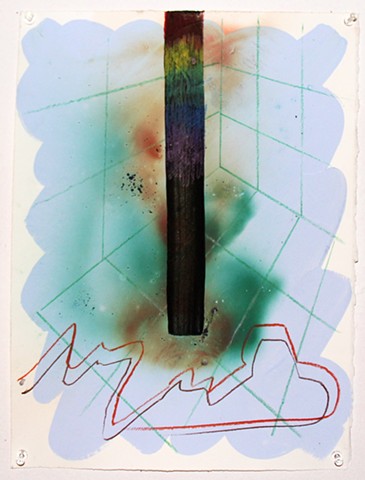 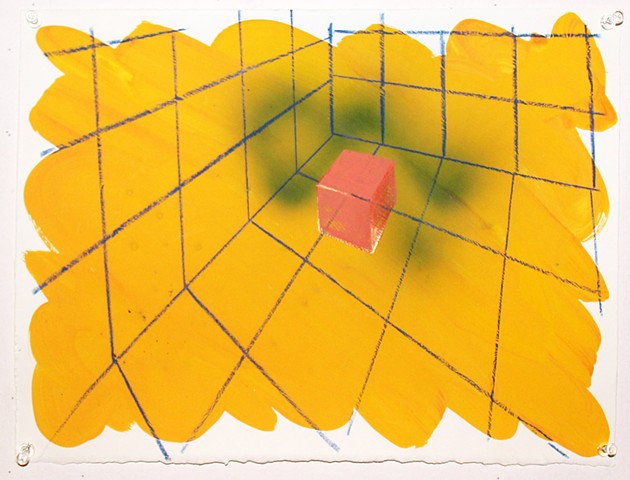 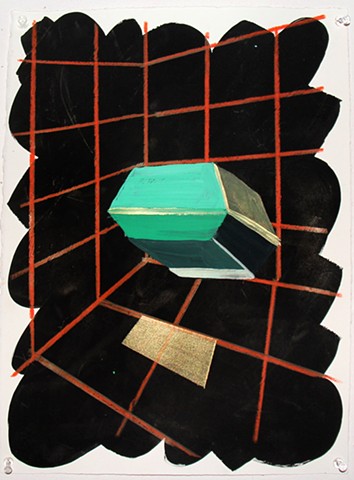 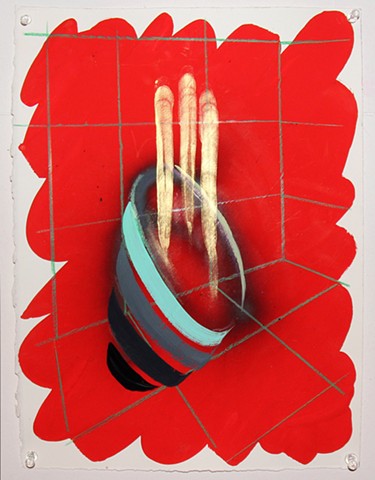 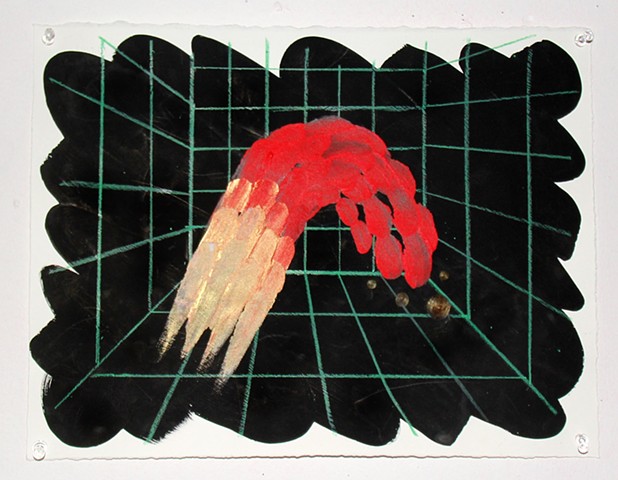 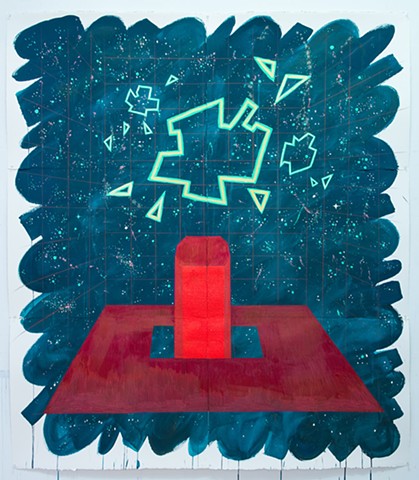 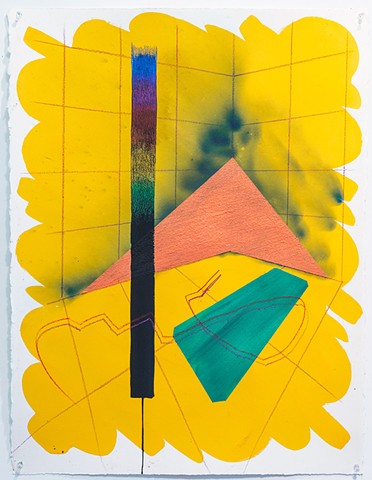 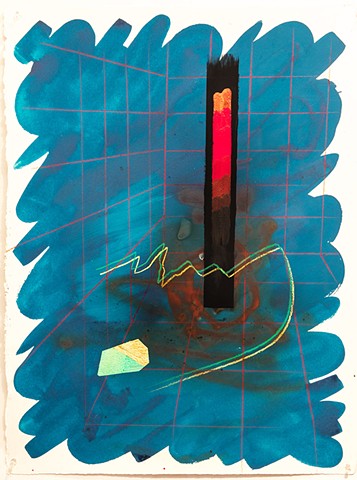 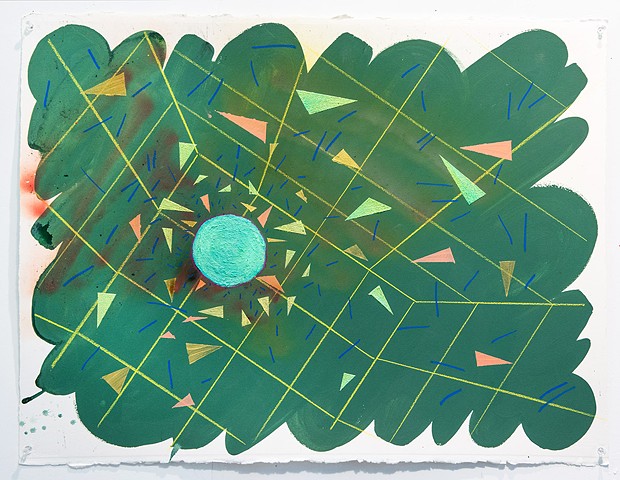 "Simulated oases, adventure game shows, and gymnastics are amongst the varied references in Julia Norton’s ongoing exploration of environment, body, and form. Her most recent series, Things That Could Go Wrong in the Holodeck, builds upon Norton’s interest in spaces as sources of fantasy, reinvention, and things gone awry. In contrast to earlier works situated in environments such as deep caverns and lush jungles, here the artist places abstractions and performative gestures in a stark, wireframe environment. By stripping the background of orientation to time or place, shapes are highlighted in a series of events exposing the duality of fantasy—at turns beautiful and dangerous.

The series’ evocative title includes a well-known reference for Star Trek fans, citing a room where one enters a computer program to live out fantasies and inhabit places of their own design. Norton considers the holodeck as the ultimate space for the imagination, one in which she is also drawn to the inevitable glitch. In one Next Generation episode, safe fantasy became dangerous reality as the villain hacked the program to bring himself to life. Another character, detaching from reality to spend increasing time in his virtual world, foretold a psychological condition that now exists in modern society.

Norton interprets the positive and negative aspects of this realm with a series of events marked by performative gestures. Panels of thick paper, some assembled in grid-like fashion with various iterations, reveal a more transient sensibility than her earlier works; compositions suspended in bubble-like portals defy the traditional stability of edge-to-edge painting. Cartoonish framing meets sci-fi, abstracted. As her shapes and marks inhabit the recesses of a blank stage, Norton explores their unlikely and potentially awkward meeting.

Investigating the relationship between body and material with a variety of marks, the artist contrasts gentle fingerprints with the smushing of color and the pushing of hard lines. In this she tracks movements that might be perceived as violent, gentle, affectionate, aggressive. A selection of smaller works features foundational marks made by smoke bombs, an aggressive and unpredictable material. Norton likens working with the material to a sort of dance where she embraces its physically as well as the lack of control. In a process of working things out, the panels build in distinct yet complementary layers based upon each action.

The focus pointedly shifts from center stage to the peripheral in Norton’s works, as events reference stranger things happening in the wings. In Tied (2016), the sole object in the frame—a desk-like structure also reminiscent of a Tetris piece in reverse—is grounded in one corner of the holodeck. A golden string has sprung loose, appearing as a curious sort of tassel or the ignited ends of two long fuses. Its title infers a less violent sort of action, though the metaphors of being untied or letting go can easily relate to the metaphor of a lit fuse. The resulting duality of the action’s effects lie at the heart of Norton’s premise: embracing the diverse connotations of an action that can speak to being bound as much as they can to being set free." - Erin Sweeny